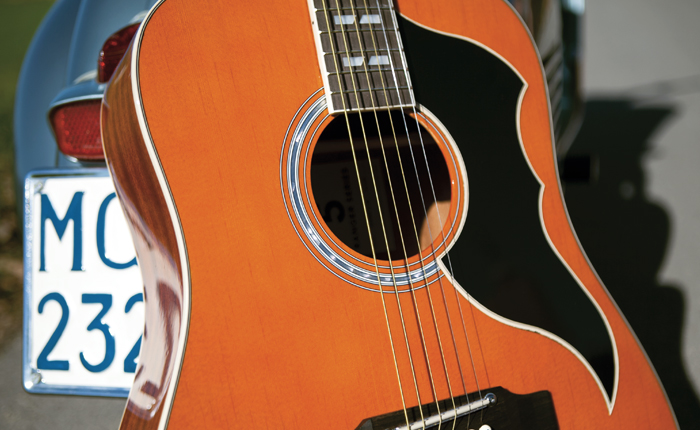 In 1962 EKO decided on producing a series of folk guitars, upon popular demand by Italian and foreign markets. After a thorough market research, the dreadnought shape was chosen, very much in fashion in the U.S. at the time. Initially the 6-string J54 was produced. It was an immediate success due to style, playability and price.

It wasn’t long until there was a demand for a 12-string version, especially in U.S.A. and UK, which led to the J56, as it was named until ‘67. Specifications as well as sound of the 6 string were applied to the 12-string, conferring to the instrument stability and build quality.

After just a short time, the J56 became the best-selling 12-string guitar on the market.

In 1967, both the 12-string and 6 string went through a restyle and the new versions were showcased for the first time during the Frankfurt Messe under the names of Ranger VI and Ranger XII. Demand for the Ranger was so high that EKO had to create a production dedicated only to the Ranger Series.

In just a short time, the demand for the 12-string superseded that of the 6-string.

In 2015, also to respond to the demand of the many aficionados, EKO is continuing the tradition of the Ranger by introducing a Vintage Reissue version as 6 and 12 string.

Preserving all of the main features of the models from the past like the Bolt-On neck and the adjustable aluminum bridge saddle, the zero-fret and the square dots. Technically improved, still maintaining the same combination of natural mahogany back and sides with the reinforced spruce top. Visually retro fitted with the stylish newly designed bridge, the revised pick guard that maintains the typical shape as in the past and the Stain Top to resemble the original color shade.

Ranger VR. The re birth of an iconic classic guitar.

Don’t miss the comeback of the most successful European guitar ever.

Part of EKO’s production since 1964 under various name and versions, a successful story continues.

Stay tuned to find out more.